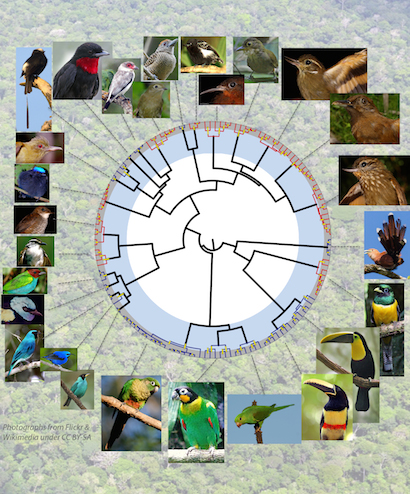 Mobility, not geology as previously thought, is the key to avian biodiversity in much of Central and South America, according to new research published today in the journal Nature and co-authored by an Occidental College biologist.

John McCormack, assistant professor of biology and curator of the bird and mammal collection at the Moore Laboratory of Zoology at Occidental, is part of an international team of researchers challenging a commonly held view that explains how so many species of birds came to inhabit the Neotropics, a rainforest-heavy area that extends from Mexico to the southernmost tip of South America. (This area is known to have more species of birds than anywhere else in the world.)

The new research suggests that tropical bird speciation is not directly linked to geological and climate changes in this biologically rich area, as traditionally thought, but is driven by movements of birds across physical barriers such as mountains and rivers that occurred long after those landscapes’ formation. In other words, it’s not landscape changes that drive genetic variation, at least in this area. The findings may be applicable to other regions and other types of organisms, the researchers say.

"This study shows that the landscape is important to generating biodiversity, but in a different way than we thought," says McCormack, one of three co-authors of the study, including Brian T. Smith, curator at New York City’s American Museum of Natural History, and Robb Brumfield, director of the Museum of Natural Science at Louisiana State University. "It turns out that a bird's ability to disperse over and around major barriers like mountains and rivers and then settle down is what's driving diversification. Previously it was assumed that the species were more or less in place and static, and it was the changing landscape, like mountain formation, that carved up species' ranges, creating new species."

McCormack led a team that assembled the samples and sequenced the DNA from the 27 bird species involved in the study while a postdoc at LSU from 2009 to 2011. He helped produce the paper after moving to Occidental.

Scientists have generally linked Neotropical bird speciation—the process by which new species are formed—to changes in the Earth’s landscape over time. When rivers change course, mountains rise and continents drift, a once-continuous population can be separated into two or more smaller populations that eventually become different species. But an alternative model attributes Neotropical bird speciation to the movement of the avians across these geographical barriers.

To examine these two models, the scientists compared genetic patterns among a diverse array of bird lineages that occur in the Neotropics. Each of the 27 species analyzed contained populations situated on the opposite side of large dispersal barriers. Using genetic data, the scientists were able to estimate the time that the populations became isolated from one another. They found that most speciation occurred in the Pleistocene, which began about 2.6 million years ago—long after the origin of the Andes Mountains and the Amazon River—aligning with the alternative speciation model. Under this model, bird lineages with a longer occupation of the landscape have a higher likelihood of moving across geographical barriers and diversifying.

"The idea with the effect of time is that eventually, if you inhabit a landscape long enough, you'll find a way over and around barriers due to chance dispersal events," McCormack says.

Birds might have an advantage over other kinds of living creatures, too, because of their ability to fly over geographic barriers, but that idea "needs to be tested in other organisms," McCormack says. "At the Moore Lab, we have a grant right now to test similar ideas in birds as well as reptiles and amphibians. Preliminary data suggests that landscape events like mountain formation might have played a greater role in diversification in reptiles and amphibians than in birds. Reptile and amphibian divergences tend to line up more with landscape-formation events."

The theory brought forth in the Nature study is not new, McCormack says, "but it's never been tested on this large of a scale: 27 species and thousands of individual samples spanning all the major landscape features of Central and South America." The thousands of samples used in the study represent the culmination of more than 30 years of field expeditions led by generations of LSU students and scientists, plus similar work done by ornithologists at other research collections.