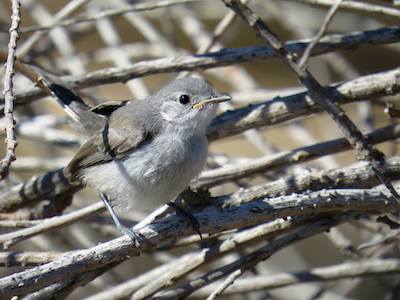 The genomic research of Occidental College biology professor and bird expert John E. McCormack has carried the day in determining that the coastal California gnatcatcher will remain on the endangered species list — which bars the development of thousands of acres of coastal real estate.

When McCormack, director of the Moore Laboratory of Zoology, saw that real estate developers had filed a petition seeking to remove the bird from the protected list, he took it upon himself to write a letter to the Los Angeles Times in July 2014 critical of the science behind the de-listing effort. The Times published his letter, which was seen by the editor of the journal where the developer-backed study had been published. At the editor’s invitation, McCormack wrote a rebuttal, conducting independent research with Moore Lab Collections Manager James Maley.

Ultimately, federal wildlife officials agreed with McCormack’s findings in concluding on August 31 of this year that the coastal California gnatcatcher is a valid subspecies and therefore worthy of protections that have barred development on tens of thousands of acres of prime Southern California real estate for two decades.

The U.S. Fish and Wildlife Service’s finding was in response to a 2014 petition filed on behalf of real estate developers who argued that DNA analysis showed the coastal gnatcatcher is no different from other types of gnatcatchers that are thriving from the Palos Verdes Peninsula to the southern tip of Baja California.

The developers’ petition was based on DNA analysis by a group of scientists led by Robert Zink, then professor of biology at the University of Minnesota. Their peer-reviewed conclusion was that the small songbird, which is found year-round in patches of sage and cactus near the Pacific Ocean, is not a distinct subspecies.

However, this finding was at odds with decades of evidence of physical differences between the coastal gnatcatcher and gnatcatchers found in other areas.

"The issue at hand is whether the coastal California gnatcatcher is a distinct subspecies," McCormack says. "Prior work had shown that the populations in Southern California look different. If you put museum specimens next to one another, it's obvious to the naked eye. The northern coastal subspecies has less white in the tail and is darker overall....Our reanalysis revealed suggestive evidence that the coastal subspecies may contain unique genetic types."

Fish and Wildlife subsequently undertook its own 18-month review that included a panel of six independent scientists to conduct a more complete analysis to weigh all of the scientific evidence, including the new studies by Zink and McCormack.

According to McCormack, Zink’s genetic data reflected an inadequate sampling of the gnatcatcher’s genome. "The input DNA data was too coarse to provide a window into the fine-scale patterns that you'd expect for subspecies," McCormack says. "Also, the results of the analyses were overinterpreted, or in some cases incorrectly interpreted. They were simply overreaching given their data and results."

"Their analyses simply were not sophisticated compared to what is possible today," he says. "What was hanging in the balance was too important to hinge upon coarse, outdated methods."

McCormack’s findings, as well as those of the scientists on their panel, led Fish and Wildlife to deny the developers’ petition.

Fish and Wildlife’s decision blocks development in about 197,000 acres in Los Angeles, Orange, San Diego, Ventura, Riverside and San Bernardino counties designated as critical habitat for the coastal California gnatcatcher, which was originally listed in 1993.

There are an estimated 2,900 coastal California gnatcatchers left in the United States, federal wildlife authorities say, and protecting them is no trivial matter, McCormack says.

"The point of the Endangered Species Act and other similar laws is to protect all our unique biodiversity, not just the large charismatic megafauna like tigers and elephants, but also gnatcatchers that might not look so different from other gnatcatchers to non-specialists.

"Each distinct unit of biodiversity, be it a species or population, has attributes that make it an important part of its habitat, often in ways that aren't readily apparent. These slightly different varieties are what allow evolution to continue. Variety drives evolution. Without populations that are all slightly different, species won't be able to adapt, for example, to our rapidly changing climate. So when you protect diversity, you are protecting biodiversity against extinction," he explains.

McCormack could not be more pleased about the outcome in this case. "When big societal issues hang in the balance, it's important that science has a chance to work. Science is a process, and in this case, science worked. Research and rebuttal happened in real time while the decision was being made."